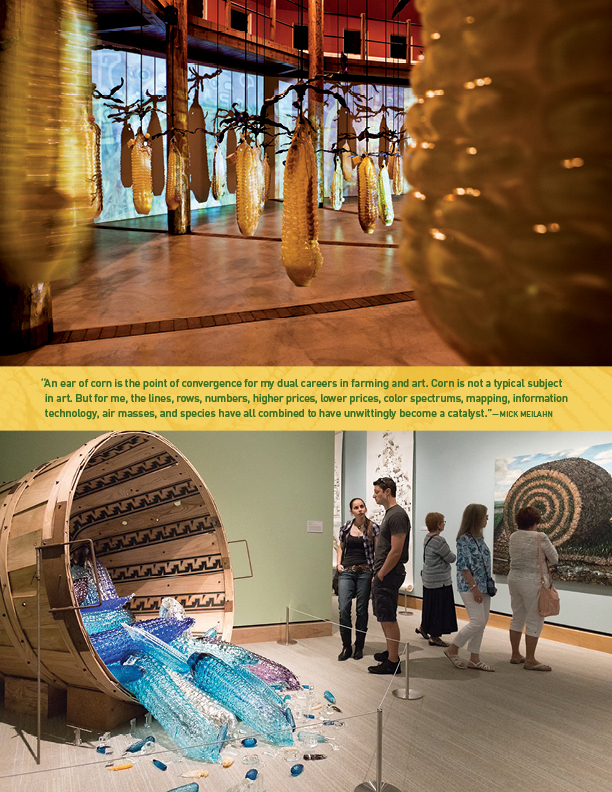 Primordial Shift is an installation dealing with the implications of genetic modification of corn. It consists of 32 hand-blown glass ears of corn averaging 4' high suspended on stalks of cast bronze and blown glass, tethered with rope from the ceiling combined with audio and video projected as a backdrop to create an illusion of gentle swaying in the field. The creative force behind the project is Mick Meilahn, who like others of his generation, learned glassmaking as a university student in Wisconsin in the 1970’s, and subsequently participated in the wave that became The American Studio Glass Movement. In the 20th Century, a paradigm shift occurred in genetics, when scientists discovered how to unravel genetic code; the genetic code itself, DNA; and the commodification of GMOs and implications for consumers. As an undergraduate, Meilahn spent a quarter abroad working with glass legend, Erwin Eisch in Frauenau, Germany. After graduation, he spent a year as a Peace Corps volunteer in Bolivia, after which he earned a Masters degree in glass and sculpture under Joel Philip Myers at Illinois State University, Normal. Ultimately, his roots drew him back home to his family’s farm in east central Wisconsin where he built a hot glass studio and operated the farm with his family. In time, Meilahn’s passion for art and farming became one-in-the-same as a form of creative expression. In recent years, his work has centered on corn as an icon, and all that it represents in culture, food, and science. Mick Meilahn has taught at Penland School in North Carolina and The Archie Bray Foundation in Montana. His work has been exhibited in the annual Smithsonian Craft Show and is in the collection of Corning Museum of Glass, which has also featured Meilahn’s work for over four decades in its juried publication, New Glass Review. In 2008, The Figge Art Museum commissioned an installation measuring 18'h x 40's x 40', which it frequently installs, and which has become a popular attendance-generating attraction. Meilahn’s installations are about the fragility of glass and genetic modification. His installations afford museum patrons the opportunity to experience the story of corn, its production, and agriculture from the perspective of this unique and amazingly talented and visionary artist. https://www.davidjwagnerllc.com/Mick-Meilahn-PRIMORDIAL-SHIFT.pdf, https://mahb.stanford.edu/blog/mick-meilahns-primordial-shift/

Back to Eleventh-Hour Listings